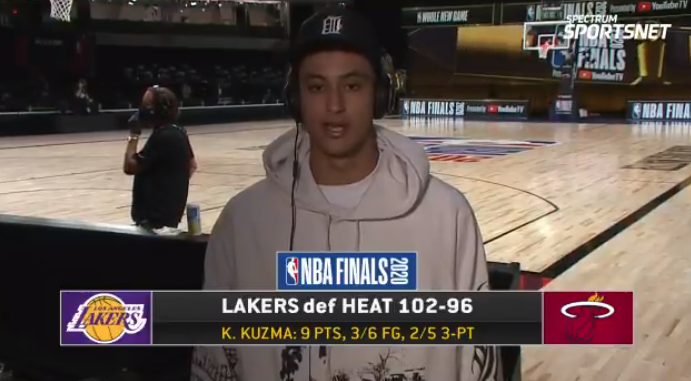 Tiger Fight, October 7th. In the NBA Finals that ended today, the Lakers defeated the Heat 102-96, leading by a big score of 3-1. After the game, Lakers forward Kyle Kuzma was interviewed by the media on the sidelines.

When talking about the performance of teammate Kentavius ​​Caldwell Pope, Kuzma said: "Those are big heart shots. He was born for these shots. He has experienced a lot this season. He He is a strong person. I am happy for him. He did several big scenes, which helped us a lot to win this game."

Talking about how the team restricted Jimmy Butler, Kuzma said: "We try to keep the ball in his left hand as much as possible. You know, he has made many difficult shots before. We did the same in this game. Of course, his defensive arrangement is better than in previous games. We tried our best to defend his jumpers, be careful not to foul him, and try our best to push him to the edge of the court. We did a great job."

Talking about how the team stays focused, Kuzma said: "We must have a stronger desire to win than our opponents. The problem is simple. We have come out of the defeat two days ago. We are more hungry than them, so we win. Up."